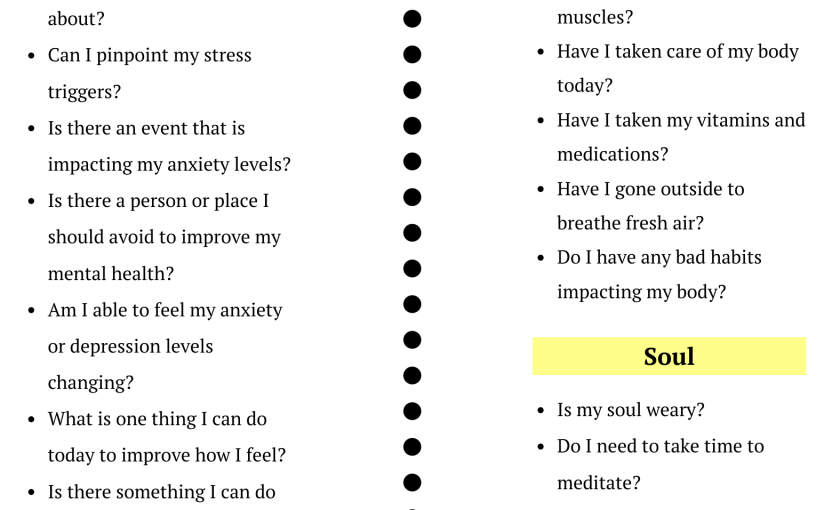 Hey everyone, happy Monday! The last week has been a bit crazy with work and then my surgery. I just didn’t have a ton of energy to be honest, so I relaxed as much as I could. I also took the opportunity to do a little wellness check up. No, not checking my heart rate or cholesterol levels (although the results would be disturbing I’m sure) but checking on my mind, body, and soul- the three things that need to work together to promote my general well-being!

How do you honestly check in with yourself? What do you need to know about your mind, body, and soul? I’m really not sure if I have the answer for everyone, but for myself, I try to answer a few questions such as:

To be honest, I just answered “yes” to all of these questions. I’ve definitely felt sore and tense lately and I’ve also been retreating to my bedroom and hiding my feelings. It just *feels* easier even though I know it does me no good.

But enough about me. I wanted to create a little checklist to help guide you through your mind, body, and soul check up. Do this daily, weekly, monthly, whatever you need! Print it out and keep it with you (right click, save to your computer).

Hey everyone! I’m really excited to share this blog post with you because its all about normalizing mental health! As you may or may not know, May is Mental Health Awareness month! I make it part of my blog’s purpose to spread awareness and share my struggles with all of you in the hopes that it will help at least one person not feel so alone. But today’s blog post is more for those that don’t suffer from mental health dilemmas but want to help those who do!

Mental health is slowly becoming a topic that isn’t taboo or brushed under the rug. But we still have a long way to go! Normalizing something that’s important to all of us (we all have a state of mental health!) can make such a difference in our society! If you aren’t sure of how to promote awareness and normalize mental health conversations, here are some tips!

“I need my crazy meds today.” I’ve caught myself saying that before and its not ok. I’m not crazy. I need medication to balance my brain chemicals. That’s it. Avoid saying things to others that might infer their “craziness.” Questions like “did you take your happy pills?” should be replaced with “did you take you medication?” My medication doesn’t make me happy necessarily, it simply keeps my mind healthy!

Understanding what happens in the mind to cause anxiety, depression, and even suicide is important. Learn about mental illnesses and why they occur. Share what you know with others. Recognize the signs of poor mental health and offer a listening ear to those who may need it.

I was at a dinner the other night with some of David’s business acquaintances. Another lady and I were talking about medical diagnosis and things of that nature when I mentioned that I was seeing a doctor to get help with my depression and anxiety. She looked surprised and quietly admitted that she’s been on medication for years. All of the sudden we were sharing stories and opening up about our struggles. It was liberating! And it felt normal, not shameful. Share your story if you have one and if you don’t, listen to someone else’s and engage with them.

Normalize it in the workplace

More and more workplaces are hosting clinics and “lunch and learns” to talk about mental health in the workplace. If your company hasn’t hosted such an event, suggest it! Ask your HR department to bring in an expert to talk about self-care and helping others who may struggle. Starting this conversation is one of the best ways to normalize mental health care in your work place.

If there’s anything my generation has learned on social media its that change can often start with a simple post. Update your Facebook status recognizing May as being Mental Health Awareness month. Remind professional acquaintances on LinkedIn by sharing a scholarly article. Share this blog post with friends and family to keep the conversation going!

Mental health is so important and recognizing its impact on our society is a step in the right direction! 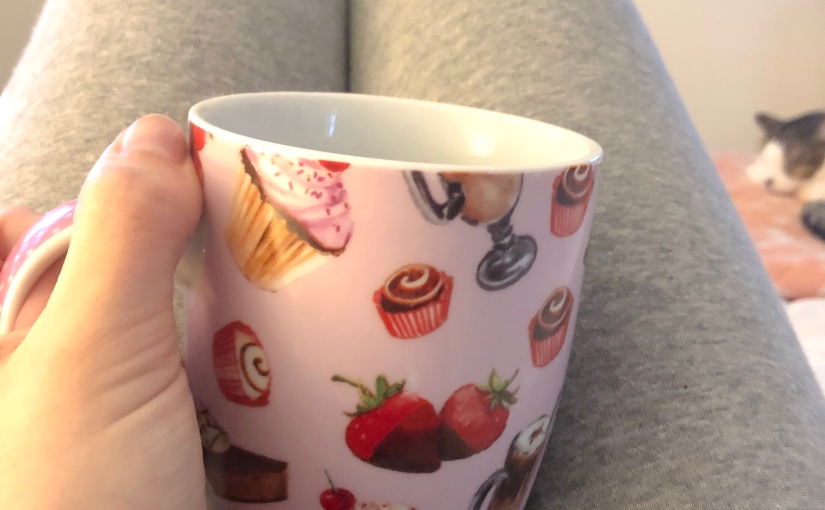 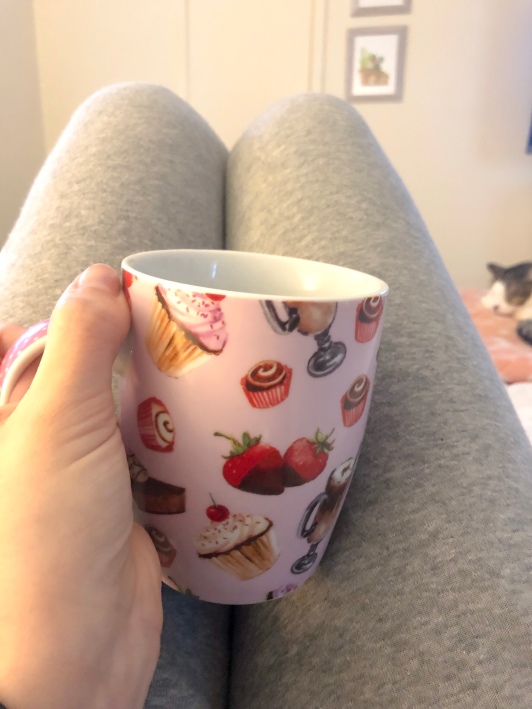 Hey everyone! Its been a busy start to the year with lots going on at work and wedding planning. I decided I wanted to take a little break and take care of my mental health as well as share something interesting I discovered about myself that may apply to you too! I’m an Empath and everything in life makes sense all of the sudden.

An Empath is someone who has the ability to literally feel the emotions and energy of other people. I was talking to my coworker the other day explaining how it can be tiring and upsetting keeping up with everyone’s moods in the office. She looked at me and said, “Liz, I think you’re a lot like me because I’m an Empath and so are you.” I had no clue what that was. She told me it was basically the innate ability of certain people to quite literally feel other people’s energy. And it can be exhausting.

After doing some research on the traits of an Empath, I felt as if I had discovered a part of myself that had been hidden away. Empaths are incredibly sensitive people and tend to be highly intuitive to people and situations. They absorb emotional energy wherever they go whether they like it or not. They’re also a target for “energy vampires” that are often on the other end of the empathy spectrum and have a difficult time showing empathy. These polar-opposite people can latch onto Empaths knowing that a fit of rage they throw can literally drain them of physical energy and even hurt their self-esteem.

You can read more about Empathic traits here, I just wanted to share the big ones that stood out to me!

I often wondered why it was so easy for some people to be scolded by their boss and brush it off as “whatever” when I would spend days if not weeks trying to cope with even a sideways glance from mine. Or why I’d just look at a new person I’d meet and feel a little leery of them when others are completely open. And perhaps most importantly, why someone else’s bad day could impact me so much.

There are a million scenarios I could offer, but my Empathic tendencies impact me in more ways than even I know. I read somewhere that roughly 20% of the population are Empaths. At one point in time, it was considered a psychic or supernatural gift. Modern science has identified that the part of the brain that allows us to show empathy is just hyperactive in the brain of an Empath. In other words, I’m overly empathetic.

I share my experience with you so you know you aren’t alone and there may be a reason for your tendencies! Don’t feel strange anymore when you feel the energy of others around you. Don’t let someone tell you that something that upset you is just “something to get over.” For people that are particularly sensitive, this in itself can be energy draining.

I’m still learning how to cope and what I can do to make the empathic part of my brain take a chill pill. But for now, I cope by embracing it. The more I fight it, the more exhausted I am. Talk with a counselor that’s trained in this area. And most importantly, recognize this as a gift that not many people will ever have.

It’s Friyay and I’m sharing with you some of my new favorite health drinks! Weekends tend to be the worst days for cheating on the 1200 calorie diet I’ve imposed upon myself. There’s just so much yummy, high calorie food around and I can’t help but eat it, especially when David wants to go get wings and watch a football game. I’ve more than likely eaten my weight in wings and fried pickles this year alone. One thing I can’t stand is adding more calories to my diet with things I drink. I’m replacing sodas and juice with a new health drink I’m in love with: Bai Antioxidant Water!

If you haven’t heard of Bai drinks, they’re made from white tea extract and coffeefruit extract and loaded with antioxidants. They have several different flavors to choose from including these amazing coconut infused ones, which happen to be my favorites! I’m dying to try the “bubbly” ones they sell that are carbonated. I bet they would taste amazing poured over some crushed ice!

Bai drinks taste like you’re drinking something that’s higher in calories than it actually is. At 10 calories per bottle, you can drink a ton of these and not feel guilty! When I first saw them in Target, I was intrigued simply because I liked the packaging. I’m a marketer’s dream, what can I say? After tasting a few of the drinks, I’m totally hooked! Even my boss at work drinks them and got a few other people addicted too. They taste so refreshing and since I have a sensitive stomach, it’s one of the few drinks I can enjoy that won’t make me feel sick.

If you’ve tried other flavors, let me know which ones are your favorite! I’ll be headed to Target for my weekly “Target run” and I’m going to get a few more. I’d love some suggestions!

Hey gals! I hope your week is going well! I’m still settling into the dry heat here in Dallas. This Maryland girl is used to humidity! The first time I ever saw a cactus was in San Antonio and I just about flipped, I thought it was the coolest thing! In the same moment I noticed that the ground was cracked open. Such a bizarre thing to see for someone who grew up by the water! With all this dry heat, my skin has suffered and gets flaky throughout the day. My skin is also sensitive, so I have to be careful with moisturizers. Luckily, I tried Valentia Pure Glow Brightening Moisturizer and it worked wonders on my skin!

Like I said, my skin is sensitive! When I first tried the moisturizer, I was a little nervous. It doesn’t take much for my skin to itch and burn from a simple ingredient. I was pleasantly surprised when my skin felt good and dare I say, happy? The moisturizing ingredients are paraben free (parabens are a kind of makeup preservative) and can even be pronounced! Things like ginseng and shea butter are in this product!

The process of putting it on is simple: Put it on before your makeup or before you go to bed (or both if your skin is extra dry). If you want the full Valentia regiment, use the cleansing and toning serums. I love that it’s a cream and not an oil or butter-like paste. A little goes a long way too, which I appreciate as beauty products can empty the pocket book pretty fast!

Anytime I’ve ever gone into a beauty store and bought a skincare item, the salespeople always ask me if I have a good moisturizer. That’s how important skincare is. Makeup can’t work wonders without a good base to start with. Taking care of our skin is so important to keep it healthy and looking nice!