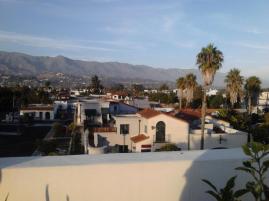 A few years back, I took an awesome trip to California for a conference of young leaders from around the country. I ended up getting a full travel scholarship to fly there from Maryland. It was a long weekend full of great speakers and meeting some really neat people! Unfortunately, I also lost my luggage full of favorite clothing items on that trip but whatever. I’m over it. Almost. Ok, I’m not. I fought with American Airlines over where it was for a couple months and then they finally just gave me money for reimbursement. They never found my luggage.

Anyway, moving on! Santa Barbara was wonderful. The people were incredibly nice and had nothing but good things to say about their town. The main street with all the shops and restaurants was called State street and it was always bustling no matter what time of day it was. If I had been 21, I might have taken advantage of the classier night life there. However, I didn’t want to be caught for sneaking in and then have it ruin my career. I’ve worked too hard to let alcohol take it all it away.

The mountains were absolutely stunning and they drained into the sea in such an incredible way. The west coast really

does have a little bit of everything- dessert, ocean, mountains. I took several walks during our free time to just explore and look at the landscape. It was rugged in spots. Other places looked like something out of a magazine. I really enjoyed that time to just walk and think about how amazing our world is and its beauty.

On a particularly fun outing, the organization sponsoring the event, Young America’s Foundation, took all conference attendees on a trip into the mountains above Santa Barbara to visit Rancho del Cielo meaning, “Ranch of Heaven.” It was originally owned by President and Mrs. Reagan and they visited often during his time in presidency. We toured the ranch house, which was surprisingly small and modest, and a few of the other buildings including the trailer where secret service would hang out and the tack barn for the horses. 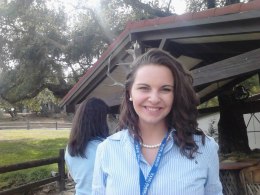 The ranch house was my favorite though. It was western themed obviously and had some old relics from the past few hundred years. One thing we learned about the Reagans was how frugal they both were. There was apparently a stove in the kitchen at one time that was prone to being a bit dangerous due to it’s age. Mrs. Reagan refused to throw it away because it still worked to a degree (she actually cooked for both of them when they were at their home). To get rid of it, a secret service agent had to tell her that they had found a “dead rat” in the stove and it was no longer healthy to use. 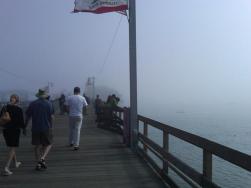 behind the mountains and see some of the riding trails the president would take to get exercise with his horses. It was so stunning. On the other side of the mountains we could see the Pacific Ocean if the fog hadn’t rolled in. That was a very strange thing about southern California. The fog would be incredibly thick at moment’s notice and you literally couldn’t see a thing in front of you. The humidity did a humdinger on my hair when that happened. It would go from straight to messy beach hair in about 10 minutes.

During the evenings, a few of us would walk out onto the pier to listen to the seals bark in the distance and watch the birds dive bomb for little fish. Those were the quiet moments that reminded

me of how far I was from home. 3000 miles is a long ways to be from the place you love. California just had a certain way of making it still feel ok. I really enjoyed the atmosphere and the people. The food made it easier too. Mahi Mahi Tuna fish tacos are amazing in case you ever want to try something a little different.

Something else unique I encountered was the pelicans there are quite friendly. The one pictured here, eyed me the entire time I was on the pier. I don’t know what he wanted but he had no trouble coming very close to 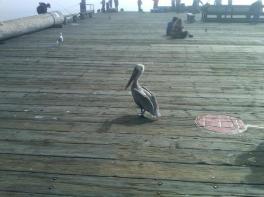 me and scrutinizing what I had in my hands. It made me a bit nervous but he was kind of cute in his little bird-like way. He was an awkward animal though. It was right about this time when the fog rolled in and my hair was ruined. The girl I was with understood my troubles and we went back to the hotel we were staying at.

It was a really wonderful trip full of memories and I was really lucky that I got to go. If you’re interested in what the organization does and when these kinds of conferences are going on visit this website for more information. I’ve been involved with them since I was in high school and have gotten to do some cool stuff and meet really influential people.

I hope you enjoyed this little peak into Santa Barbara, California and my trip there. Honestly, a blog post doesn’t do it justice and I really can’t give you all the details of my trip because it would take way too long. All I can say is go to California and see what all the hype is about!