I’ve been thinking long and hard about what to write today. It’s not that I have lack of anything to write, but the words I would like to say just aren’t coming to me. As most of you remember, September 11, 2001 was an absolute tragedy for Americans across the nation, particularly for those in New York City, near the Pentagon, and in the small Pennsylvania town that saw a plane crash in a field. Hours of video footage shows the same thing- death, despair, destruction, and loss. Looking up at those burning buildings and knowing there isn’t a thing anyone can do to stop the inevitable is heart wrenching.

Fast forward to September 12. There’s still dust in the air, fires still burning, bodies still beneath the ruble. But something has changed in the atmosphere. America is alive with passion and pride. New York wakes up with determination and strength. Rescue workers and volunteers gather at Ground Zero to begin recovery. Former President Bush delivers a speech using only a bull horn. For once we aren’t political party members, we are people united by our national pride. Looking to the sky saying our prayers and looking to our flag pledging our allegiance. Slowly, we begin the long process of healing and rebuilding. That day sets a precedent for the next few years.

I look back on that day every year and it brings tears to my eyes. It’s like the D-Day of our generation. A tragedy we won’t forget. The crazy thing is our children don’t and won’t remember. It’s just a day in history for them. With my own kids, I’m not going to let them forget because when we forget we become vulnerable.

A few years ago I was able to visit the World Trade Center memorial site. What an absolutely humbling experience to walk on such hallowed ground. You don’t realize how big these buildings were until you see the basement-turned-memorial for each tower. More importantly, you don’t understand the loss of life until you see every name etched into the stone surrounding the memorial. My only complaint about the site was that the American flag wasn’t bigger. 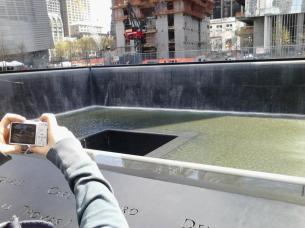 Old cemetery across the street that saw the towers fall 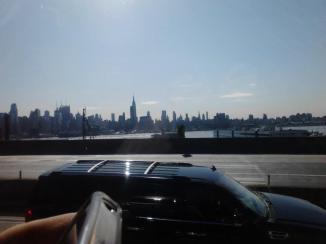 After visiting this beautiful site and reliving every moment of that day, I can honestly say there’s no other place I’d rather call home than here in my America. And this pride electrifies me every time I walk on such hallowed ground.

Before I close, I have to ask: Where were you September 11? Comment below.