More Than Expensive Rugs and Cats!

Since I started dating my boyfriend last year I’ve had my little world opened to a whole new world and culture. The only thing I knew about Persians before meeting him was that they made incredible rugs and bread the cutest kitties. Needless to say learning about where he’s from was an eye opening experience for me.

Before launching into the little things I’ve learned about Iran, there are a few things I have to clarify. First Iranians are not Arabs, they are Persians. I confused that in the beginning and many other people in western cultures tend to do the same thing. Second, my boyfriend does live in the United States but was born and raised in his home country. We are in a long distance relationship but not cross-continental long distance! Finally, he’s bilingual and I’m not. But I’m trying to pick up some of the Persian/Farsi language.

One of the most fun experiences I had when I started dating Amir is trying new food! In the picture is chicken kabob and

saffron rice with grilled tomatoes. I absolutely love this dish because the chicken is marinated in a yogurt sauce with tons of seasoning so its bursting with flavor. So yummy! We usually order/make with this tahdig, which is basically the browned part of the rice on the bottom of the pot. Its really crispy and tasty to eat! 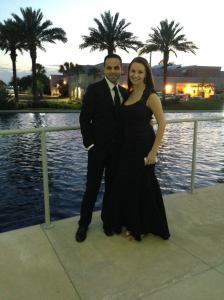 I went to a gala for this event in Daytona Beach with my boyfriend and our two other friends, Shayan and Christina. Christina and I were two of the few Americans there to partake in this annual celebration and learned a lot throughout the evening. Granted most things were said in Farsi, she and I could get the general idea.

Finally, I’ve really enjoyed trying to pick up the language. There have been quite a few laughs that have resulted in me trying to pronounce certain words and phrases. So far I’ve learned a few things. ‘Salam‘ means ‘hello’ and ‘che toori‘ means ‘how are you.’ Another cute little thing I’ve picked up is the word ‘azizam’ meaning ‘sweetheart’ or ‘dear friend.’ Depending on the person you are speaking to will determine the meaning of the word. I’ve learned other words and phrases but none of which I can accurately spell for you!